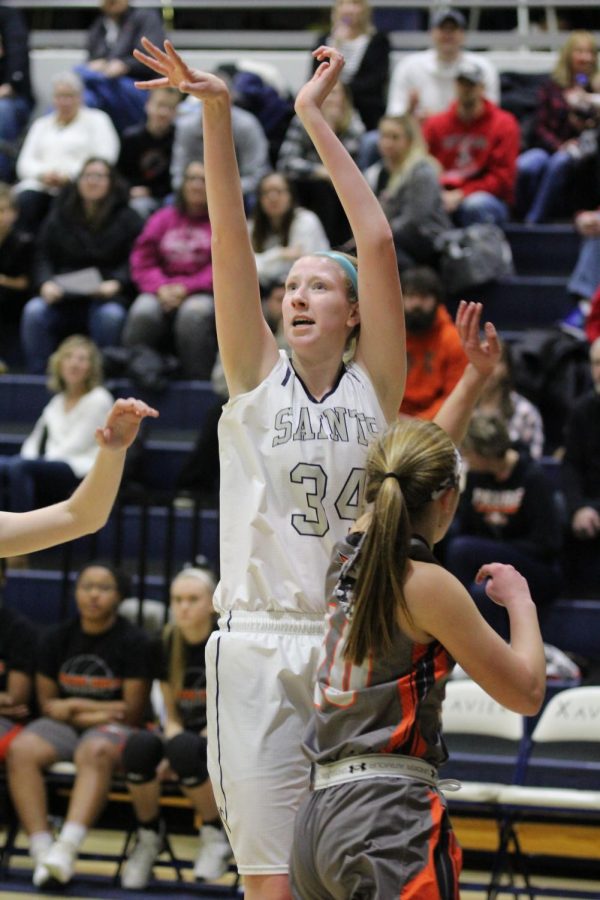 Senior Amelia Ivester shoots over a defender in a game against Prairie on Friday, February 2. Camryn McPherson Photo.

It is that time of year again. It is win or go home.

For the seniors on the Xavier girls’ basketball team, this is their last chance at a state championship. With their high school careers coming to an end, this tournament means more to them than ever before.

“It is crazy to me because after playing four years, it is coming to an end faster than I imagined,” senior center Amelia Ivester said. “I think our team looks good. We have been playing really good as a team and this is where we want to be going into regionals.”

The Saints headed into regional play with a record of 13-8. The girls are riding high after finishing the regular season on a five game winning streak. The girls know they will have to work hard in order to succeed in the postseason.

“Heading into the postseason we know we will have to work hard during every drill at practice and give it our all,” sophomore guard Caitlynn Daniels said. “Our road to state will not be easy. Coming off of our five game winning streak has given us confidence and hopefully momentum into postseason play.”

The girls earned a first round bye in the sub state games. They then hosted Western Dubuque on Saturday, February 17 at 7 p.m. The Saints won 50-46. The Saints played Center Point Urbana on Tuesday, February 20 for a spot in the state tournament.

The first round of the state tournament will be held on Monday, February 26 at Wells Fargo Arena in Des Moines.